UBC’s connection with China began in 1915 when its first female student from China enrolled in the Faculty of Arts. Since the 1940s, UBC has taken key steps building its academic competence with China through a wide range of studies. UBC was among the first Canadian institutions to engage with China in the country’s era of modernization from the late 1970s. 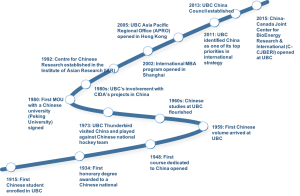 Since signing its first collaboration agreement with Peking University in 1980, UBC has gone on to connect with over 50 other universities in China. Today, UBC hosts some of Canada’s leading Chinese study programs. Students from China form UBC’s largest international student body.

With these broad and in-depth connections, UBC today is seen as the Province of British Columbia’s and Canada’s educational gateway to China. Its role is not only to develop Canadians’ understanding of China but also to develop with our Chinese colleagues their better understanding of Canada.